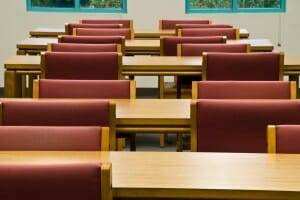 Higher education is widely available across the country, but it can come at a very high cost. That high cost includes books, tuition, living expenses, parking, fees, and a host of other expenses. To pay for those costs more and more students go to easily available student loans that have become as much a part of the American higher education as sports. Unlike other high costs and debts, student loans are not as easily discharged in bankruptcy.

Part of the problem of financing a college or graduate education is the how available loans are. Student loans, unlike other kinds, are backed by the guarantee of the federal government. So banks are more likely to make funds available to students. There is also the fact that it is very difficult to discharge student loans in bankruptcy because of federal laws that limit how federally backed student loans are discharged in bankruptcy.

To prevent doctors, lawyers, and other professionals from taking out huge amounts of college loans and then declaring bankruptcy, congress limited student loans to be discharged in bankruptcy to people suffering from an undue hardship. This sets debts acquired to get an education apart from, say, debts acquired to get a house, car, or boat. Those debts are much simpler to deal with in a bankruptcy action. The problem with that approach is the fact that congress did not subsequently define what undue hardship means.

When congress fails to define a term in the federal bankruptcy code, federal courts fill that void. But there are 13 different appellate courts in the federal court system, and each one could potentially come up with its own definition of a vague term. In the case of the term ‘undue hardship’ regarding student loans and bankruptcy, two different definitions have evolved from the different appellate courts.

The second test is used in less appellate courts, but differs slightly from the Brenner test, and is known as the totality of the circumstances test. This test establishes a three part test to determine if a person can eliminate student loans in bankruptcy:

If a debtor can show that he has an undue hardship after looking at those three factors, a court may discharge his debts in a bankruptcy petition.

Now the question of which or neither of these tests should apply is before the Supreme Court. The High Court could refuse to the case, take up the case and choose one or the other, or take up the case and form a completely new test. No matter what the court chooses to do, the fact will remain that student loans will continue to be treated differently in bankruptcy cases until congress acts to change the undue portion of the federal bankruptcy code.

If you face financial uncertainty in the San Diego area and are looking for a refuge, contact us. At The Bankruptcy Law Center we help struggling families and individuals find a way towards a better financial future.